September 26, 2015 Written by The Copyright Detective 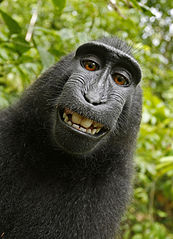 Animal copyrights ownership: a nature photographer and self-publisher vs. a crested macaque.

Animal copyrights is one of the more interesting copyright court cases of late. In September 2015 PETA filed a copyright infringement suit in a California federal court asking that Naruto, a crested macaque, be declared the copyright owner of a selfie he took in the jungles of an Indonesian island using camera equipment belonging to David J. Slater, a British nature photographer. The suit seeks a court order allowing PETA to administer all proceeds from the photos for the benefit of Naturo and other crested macaques living in a reserve on the Indonesian island. Joining PETA in the suit is Antje Engelhardt, Ph.D., a primatologist from Germany who has studied the Sulawesi macaques.
Although the photo was taken in Indonesia and Slater is British, the animal copyrights suit can be tried in a US court because Slater self-published a book titled Wildlife Personalities in California using the services of Blurb, an American publishing company. The book contains photos taken by Naturo.

The U.S. Copyright Office has made it clear it will not as a matter of policy issue copyright to non-humans. In a compendium explaining policy issued in 2014 it stated that works produced by animals, whether a photo taken by a monkey or a mural painted by an elephant, would not qualify for copyright registration.

However, lawyers for PETA argue that the U.S. Constitution grants rights to “authors” of works—nowhere defining authors as “human beings.” In supporting animal copyrights PETA argued that the Copyright Office Policy Statement reflects opinion and is not law. PETA claimed the macaque, having snapped the photos, is the author and therefore the copyright owner of the photo.

On January 28, 2016 a US District judge dismissed the case, indicating that a monkey cannot own a copyright. On March 20, 2016 PETA filed an appeal to the judge’s ruling.

Wikimedia Commons takes the position that the monkey “owns” the selfie, but because he is a non-human, he cannot under current copyright law be granted copyright in the picture. Wikimedia claims that, therefore, the picture is in the public domain and displays the selfie of Naturo shown above on their site, classifying it as a public domain photo. The photographer has threatened to sue Wikimedia for copyright infringement.

If you are interested in knowing more about animal copyrights, the filing is here http://www.mediapeta.com/peta/PDF/Complaint.pdf.

Order your copy of Copyright Clearance for Creatives for a basic overview of copyright law and essential guidelines on when, how, and where to get permission to use copyright content in your works.