November 14, 2015 Written by The Copyright Detective 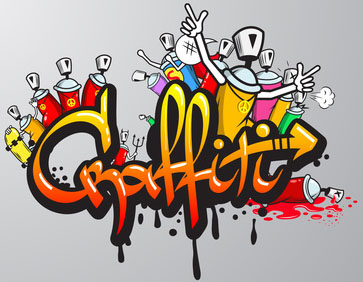 I recently acquired copyright permission for a client to use a photograph of a mural painted on the wall of a restaurant. On first consideration, my client didn’t even factor into his publication plan what action might be required for the legal use of the mural. At the time the painting was conceived and created, the artist may not have been as popular as he has since become. He is well known today, and our client’s use could well have attracted the attention of those who administer the artist’s rights. Our client held a common misconception that because an image is displayed in a place to which the public has easy access, it is ok to copy it and use it without consideration of ownership.

I thought of this situation when I read this week of a lawsuit filed by Brooklyn-based graffiti artist Joseph Tierney. The suit was filed against fashion house Moschino for the use of his artwork in clothing designs without his authorization. Tierney claimed the designs were taken from a mural titled Vandal Eyes, which he painted in Detroit in 2012. Katy Perry recently wore a dress designed by Jeremy Scott for Moschino at a fundraising Metopolitan Museum Of Art gala.

Recently, a number of cases have been filed against those who use the artwork of street artists. American Eagle faced a lawsuit brought by Miami street artist David Anasagasti (better known as AholSniffsGlue) for using in its ads a well-known street artist’s graffiti of sleepy eyeballs titled Ocean Grown. You can see photos taken from court documents of the American Eagle uses here in a Huffington Post article.

It can be argued that an image created using a wall as a canvas meets the requirements for copyright set out in U.S. copyright law. That is if it is original, unique, and fixed in a tangible medium of expression. Graffiti, or wall art of any kind for that matter, may be seen in many instances to meet these requirements, thus their creators have claim to its ownership.

Even though graffiti may fall under copyright law, some have argued that the use of images of graffiti is a fair use or that because the placement of such art on the property of others without their consent is illegal and thus copying it is acceptable.  These arguments have not held up well in court. Laws regarding the destruction of the property of others does not cancel out laws regarding the rights of creators to protect their creation when it comes to ownership questions considered in a court of law.

Authors who use photographs of artwork, including graffiti, in their work can also face infringement claims.

In 2007 the author of a book titled Tatooed Walls faced a suit brought by several street artists. He photographed over 100 images of graffiti and published them in his work. The author, Peter Rosenstein, argued that the murals were in a public space and thus fall under the fair use doctrine. An out-of-court settlement was reached and as an almost immediate result of this infringement claim, his book was removed from his publisher’s catalogue less than a month after it was published. Because he is a known aficionado of graffiti art, he may have believed the street artists would welcome the inclusion of their work in his book as an endorsement of their creative talent. If he did, he was sadly mistaken.

Another example of a book that reproduced graffiti without permission is Tony Hawk’s Pro Skater 2 Official Strategy Guide. It was published by Pearson Education a/k/a Brady Publishing. Chicago’s graffiti artist Hiram Villa brought suit for the author’s inclusion in the book of a photograph of a Villa mural without his consent. The suit was dismissed because the copyright on the mural had not been federally registered. However, the artist then federally registered the copyright and brought suit again. Once the court dismissed the publisher’s motion and it became obvious that the case would go to trial, the publisher decided to settle out of court for an undisclosed amount.

In summary, three lessons may be taken from our discussion of cases involving the use of others’ artwork without permission:

Lesson 1: We should take care when counting on fair use as an argument for copying and publishing the work of others without permission regardless of the format, location, or placement of the original work.

Lesson 2: We should not assume that because a work was created in a manner that may be viewed as a criminal act (damaging property, for example) it will not be protected under copyright law.

Lesson 3: The assumption that the original creators of work we copy and publish without their consent will welcome our use of their work is in most cases a bad one!

Order your copy of Copyright Clearance for Creatives for a basic overview of copyright law and essential guidelines on when, how, and where to get permission to use copyright content in your works.